This column first appeared in the February 2016 issue of GreeneSPEAK!


Waynesburg attorney Thomas S. Crago was a military and political leader of national stature. He served five terms in Congress, rose to the rank of Colonel in the Pennsylvania National Guard and was the first Commander-in-Chief of the National VFW.

The house he designed and had built on West Franklin Street between 1900 and 1903 was Colonial Revival in style, an expression of his patriotism and respect for the founding fathers. They, too, had built with formal symmetry and classical ornamentation, just like the ancient Greeks and Romans before them. Having studied at Waynesburg College and Princeton, Crago was fluent in Greek and Latin.

Classicism returned to popularity at the turn of the 20th century when Americans tired of the decorative excess of the Victorian period. The Colonial Revival style is still popular today.

Typical of the period, the Crago House is massive in size, square in shape, and built to last forever. The stone-trimmed exterior was constructed of a new kind of glazed, vitrified brick, invented to resist moisture and chemical corrosion. With two tin plate mills in nearby West Waynesburg, air pollution would have been a concern.

Classical elements abound inside and out. Twelve dormers pierced the hip roof, three on each side, making the structure a full three stories.   Framed by short Ionic columns, the dormers were pedimented and richly detailed. The central front dormer had a dramatic split pediment and Palladian window. At the very top of the house was a “widow’s walk” with decorative iron railing.

Below the dormers, the wide box cornice was trimmed with brackets and a string course of dentils.  This motif was repeated on the first floor porches. Wrapped in a balustrade, the porches were supported by full-sized Ionic columns and a reticulated stone foundation. The side porch was a porte cochere entrance, convenient for guests arriving by car or carriage from the alley. Originally, a second balustrade sat atop the porch roofs.

Gold-leaf frescos in the parlor, library and dining room were hand-painted in 1905 by a young Italian artist based in New York, Vincenzo Muola.   An estimate dated 1913 from Pittsburgh decorators Dewar, Clinton & Jeffcoat proposed wall-to-wall, custom-made mahogany bookcases and a matching desk for the library at the cost of $575, which would be almost $14,000 today. Arts and Crafts furniture in the billiard room was signed by Leopold Stickley of the original Stickley Brothers.


Exhausted by his work on the Military Affairs committee of the U. S. House during and after World War I, Colonel Crago died in 1924 at the age of 59. His funeral was the largest ever held in Waynesburg with mourners filling the house, porches, yard and street.

His widow, Margaret (Hoge) Crago, remained in the house until her death in 1966. Two years later, a fire destroyed two bedrooms and caused extensive smoke damage.

Enter the second owners, Erma and Robert Short, who with their five daughters restored the house to its former glory.

JOAN (SHORT) ATER CONTINUES THE STORY OF THE CRAGO HOUSE, IN HER OWN WORDS:


My parents, Robert and Erma Short, purchased the house in the spring of 1969 from the Crago's grandson, Louis Waddell III.   He might have taken possession of the house sometime after his grandmother died in 1966.  In the brief time he owned it, he rented out some of the upstairs bedrooms to Waynesburg College students.   Due to careless use of one of the space heaters on the 3rd floor a fire broke out in December 1968, destroying much of one of the 3rd floor front bedrooms and the bedroom directly below it.  You could literally stand on the 2nd floor and see the sky.  The rest of the house suffered from considerable smoke damage.

With Dad’s mechanical engineering background - and having built and remodeled houses before – he was undaunted by the challenge.   The house had 7 bedrooms and 5 bathrooms – which would give each of his five daughters their own bedroom - so needless to say we were on board too!

While work was underway repairing the walls and floors on the 2nd and 3rd floors, Dad gave each of us tasks in other areas of the house.  He taught us how to gently remove wallpaper without scoring the plaster walls, how to work on cleaning the darkened woodwork with a mixture of linseed oil and other mystery ingredients.   There was also a hand-painted frieze around the top of the walls in the dining room and library that had to be gently cleaned.

The list seemed endless but the time flew and we were actually able to move into the house in the summer of 1969 and complete the remaining work after that.  Through all of it Mom kept very busy cooking, cleaning, taking care of the family and doing research on the side to help in the selection of new wallpaper, paint, window dressings, rugs, etc.  And although much of the original furniture was gone at the time of purchase, many beautiful pieces remained and were purchased by my parents from Mr. Waddell.


The photos would have been taken soon after the purchase, before the renovations were complete.  I’ve included a brief description and commentary for each photo. 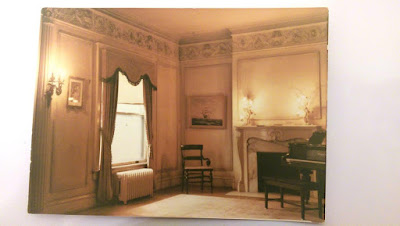 Living room:  Shown is part of the rear half of the living room.  Best guess is that the dark shadows one sees on the carvings around the top of the walls in the room and on the lower part of the walls themselves may have been in part, some smoke damage.  The drapes and cornice in the photo were original.  The fireplace carving was quite ornate and the marble background was beautiful.  The sconces on the columns were the originals as were the unusual figurine lights on the mantel.  The large grand piano on the right was one of the items our family purchased from Mr. Waddell and sounded wonderful when played by two of my sisters. 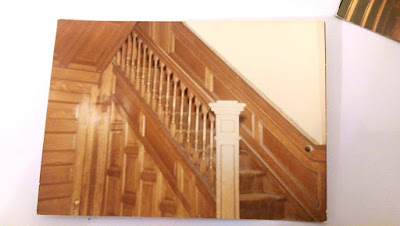 Stairway from the first floor:  The woodwork had incredible detail.  Captured in this photo are the stairs leading to the 2nd floor from the main hall.  The door on the left led to stairs down to the basement billiard room. 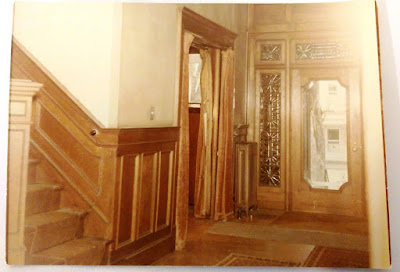 Front hall:   There were pocket doors leading from the front hall into several of the rooms including two living room doors, one into the dining room and one as shown in the “Front hall” photo into the library.  Many of these doors had drapes installed on either of side of them.  This view shows one looking out the double set of front entry doors onto the porch facing Franklin Street.  Sitting in between the double set of leaded glass doors was a vestibule with a floor made of tiny ornate tiles. 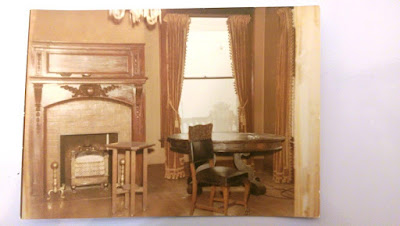 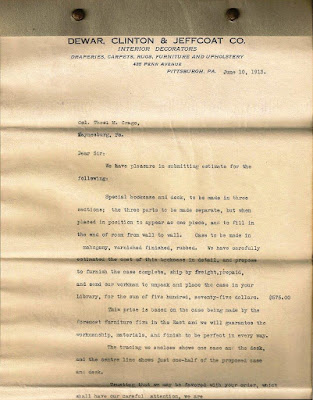 Library:  Although called the library, this room no longer contained bookcases at the time of purchase.  Attached, however, is a portion of an estimate from the Dewar, Clinton & Jeffcoat Co. in 1913 for the creation of custom mahogany wall-to-wall bookcases and desk for the room for $575.00. 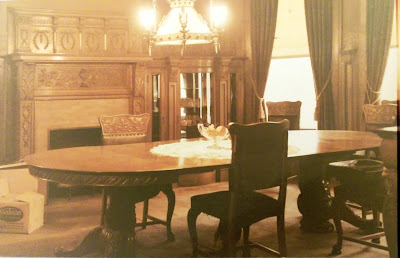 Dining room:  This was one of my favorite rooms in the house.  This old photo only captures a portion of it.  The room was located in the right rear side of the first floor, where the wall of the house on that side actually curve outward - an attractive design that helped showcase the furniture and beautiful inlaid wood pattern on the floor.  The dining room table had 10 chairs but could easily seat 14 people comfortably.  There was a large buffet with a mirror on the left wall and a server immediately to the right.   There were large built-in china cabinets on either side of the fireplace with curved glass fronts.  I recall having spent the better part of a day, carefully cleaning all of the glass doors, shelves and mirrors in the back of the cabinets; then unpacking and organizing all of Mom’s china and crystal inside of them after we moved there.

One of my other favorite features in this room was a button on the floor at the head of the table.  Hidden under the rug, Margaret Crago could discreetly step on it to call for a servant.  The bell would ring in the servant call box on the wall of the cloak room adjacent to the pantry.   I seem to remember it looking something like this: 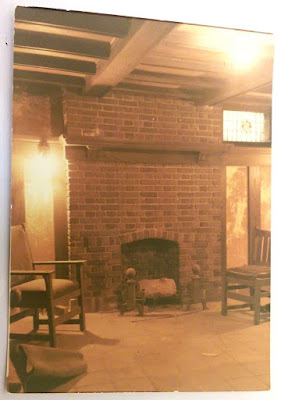 Billiard room in basement:  This room – one of the last rooms finished - had stained glass in many of the windows.  As I recall, it required quite a bit of clean up, careful removal of the chipped paint on the walls and repainting.  The furniture in this room (couch, several chairs and perhaps a table or two) turned out to be original signed pieces by Leopold Stickley – one of the original Stickley brothers.

Crago House (Photo in column, above):  This photo was taken shortly after my parents purchased the house and before the repairs and painting were done to the exterior trim.  A wrap-around porch spanned the front and right sides of the house.  There were 4 bedrooms on the 2nd floor and 3 bedrooms and a storage room on the 3rd floor.  Steps from the storage room led to an attic that in turn, led to stairs up to a widow’s walk at the very top of the house.  As you look at the front of the house, the fire occurred in the 3rd floor bedroom that spanned the first two set of dormer windows from the left and burned through to the front left bedroom on the 2nd floor.  As I enlarged the photo of the front of the house, I had to wonder in retrospect if the light-colored wood on the trim in the photo was an area that may have been repaired after the fire damage.

Ice house:  Another memorable feature of the house included a small unheated room in the back of the house called the “ice house”.  Constructed partially below ground level, it featured a small door on the side where ice would have been delivered.  There was a door coming into it from the back yard and another door leading to a landing on the inside to a stairway that led either left and up into the pantry or right and down to what would have been at one time a laundry room in the basement.

For fun, I also included a couple of photos from Christmas, 1971.  I have no idea how Dad managed to get that enormous Christmas tree in the house.  Several of us helped but Dad did most of the work.  We had to use a tall ladder to decorate the top part of it.  What fun memories. 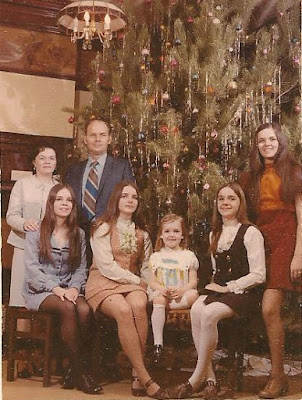 Thank you, Joan, for sharing the charming story and photos of your family's tenure in the house, and for being my research partner.   Together we learned a lot about the building and the family that created it.


Posted by Mary Beth Pastorius at 5:55 AM No comments: