This column first appeared in the December 2016 issue of GreeneSPEAK!

One hundred years ago in Waynesburg, the retail clothing business was dominated by Jewish merchants who were also civic and social leaders. With their wives and children, they added a diversity to small town life that is largely missing today.

Escaping economic and religious persecution, their families came to America from Eastern Europe in the late 19th century. While many Jewish immigrants settled in large East Coast cities, others moved to small towns like Waynesburg.

Brothers Isaac and Lee Grossman arrived first, building an elegant 4-story department store that was destroyed in the Downey House fire of 1925. They paved the way for the next generation which included nephew Reuben H. Goldberg and former employee Dan Cohen.

While the Grossmans lost their business to fire, a tragedy of a different sort befell Barney Grossman who owned a large clothing store in the Messenger Building. He was heavily indebted to Farmers and Drovers Bank, and when the bank failed in late 1906, he was forced to close his store.


However, Barney Grossman had started a tradition that continues today, the sale of men’s clothing from the corner of High and Washington Streets. He was followed by Harrison & Cohen, Army Navy, Roth’s, and since 1979, Mickey’s Men’s Store. 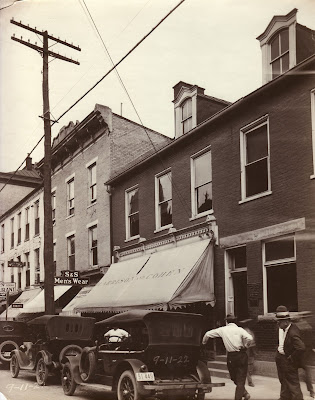 “The Pittsburgh Press” wrote in 1933: “The store of Harrison & Cohen, where for half a century the gentry of Waynesburg was outfitted, is no more. From the late ‘nineties on, judges, doctors and lawyers mingled with rollicking college freshmen at its racks and counters. Whether it was a dress suit or a football uniform, Harrison & Cohen supplied it. One of the last articles sold before the store closed its door this week, after the death of Daniel Cohen, the last surviving partner, was a 1912 football helmet. It was purchased for the Waynesburg College Museum.”


Senior partner Max Harrison had been born in England and immigrated to Philadelphia at a young age. Dan Cohen was a native of New York. Soon after forming their partnership, they became brothers-in-law when Dan married Max’s sister in 1905. They purchased the Messenger Building in 1922, modernizing the façade with Art Deco-style glass transoms and marble wainscoting that remain today.


Reuben H. Goldberg joined his Grossman uncles in Waynesburg in 1892, and soon opened his own shoe store. A decade later, he sold it to travel around the world. Returning, he started a women’s clothing store. In 1925, he created a distinctive building on West High Street with a façade of white terra cotta tiles made in Corning, N.Y. His “Ladies and Misses Outfitting Store” was located on the first floor with offices above.


Without a local synagogue, Jewish cemetery or school, the merchant families had to travel to larger towns to practice their faith. Few stayed more than one or two generations before their children moved to cities with large Jewish populations. Although their contributions are little remembered in Waynesburg today, they are held dear by their descendants.


Recently, a great-grandson of Dan Cohen wrote of growing up with his grandmother’s stories of a happy childhood on South Morris Street across from South Ward School which she had attended. She spoke admiringly of her father as a “larger-than-life figure, an outgoing fellow who was known and liked by folks across Waynesburg’s social spectrum.”

Posted by Mary Beth Pastorius at 10:00 AM No comments: