The Greene County Courthouse is the Architectural Gem of Waynesburg. According to “Buildings of Pennsylvania: Pittsburgh and Western Pennsylvania,”2010, it is “most beautiful representative of its era in western Pennsylvania.” Since 1850, it has occupied the Public Square in the center of town, a rare remnant of the pre-Civil War period of Greek Revival design.

Published in 1936, the landmark book “Early Architecture of Western Pennsylvania” included a major section on the courthouse. Author Charles Morse Stotz wrote: “It is one of the finest examples of the Greek Revival type….perfectly preserved except for the cupola, which was burned and replaced in 1926.”

He continued: “The community is justly proud of this handsome building, which serves its purpose adequately even today,” a fact that is still true in 2017. The book included architect-measured drawings of the courthouse and images by famous photographer Luke Swank. 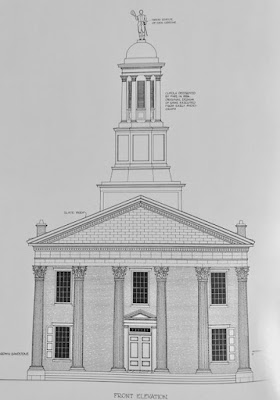 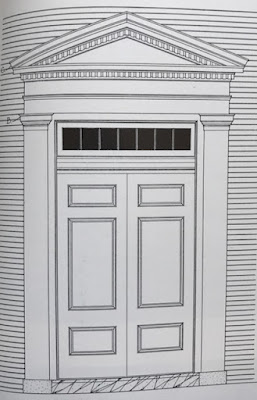 The courthouse was almost torn down during the building boom of the early 20th century when it was considered too small and old-fashioned. In 1907, Fred High wrote in “Waynesburg Prosperous and Beautiful:” “The present Court House was erected in 1852 (sic) and was one of the finest in its day, but it will soon give way to a modern building that will be in keeping with our growth and financial standing.”

What saved the courthouse was the failure of the county’s largest bank, Farmers & Drovers, halting development. Today, Greene is the only county among its neighbors to retain its Greek Revival courthouse. The others were demolished in the 1890-1900s for massive, stone edifices.

The Greene County Courthouse is a copy of one built for Fayette County three years earlier. After seeing it, local officials ordered the same plan, design and materials from the same architect-builders, Samuel and John Bryan, except they requested six Corinthian columns instead of four Ionic. The contract totaled $16,500. Fayette’s courthouse was demolished in 1890.

The design of the Greene County Courthouse is dominated by a monumental portico with 2-story fluted columns supporting a dentil-lined pediment. A smaller version of the same pediment sits atop the double entrance doors and multi-paned transom. Brick pilasters create faux columns on the side elevations, a feature also found on Waynesburg University’s Hanna Hall, designed and built in the same year by the same craftsmen.

The importance of the courthouse is further enhanced by the tall, domed and colonnaded cupola and the statue of General Greene. The original statue, destroyed in the Downey House fire, was designed by Dominicas Haas, a local clockmaker, and carved of poplar by Bradley Mahanna. Today, a third reproduction made of fiberglass sits atop the cupola.

In 1850, the first person offered the commission to carve General Greene was an itinerant artist named David Gilmore Blythe. He had just completed a statue of Lafayette for the Fayette Courthouse, charging $125. Seeing its popularity, he upped the price to $300 and lost the Greene commission. Today, Blythe’s work is highly valued and displayed in major museums. His statue of Lafayette stands in the rotunda of the present Fayette Courthouse.

Posted by Mary Beth Pastorius at 9:23 AM No comments: